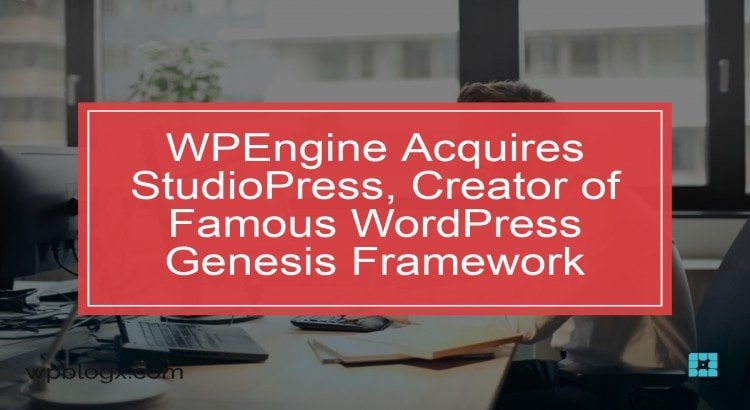 WPEngine, the WordPress hosting company announced on June 27, 2018, that it has acquires StudioPress. Genesis and its accompanying help enterprises, agencies to accelerate the building of amazing digital experiences, the suite of themes, and startups.

Brian Gardner in the year 2007 founded StudioPress with the motive to quickly and effortlessly build themes for WordPress. And now, StudioPress Genesis Framework is the most popular theme framework for WordPress and its themes are widely popular among the WordPress community.

The acquisition not only including Genesis, but it also has a collection of 60+professionally designed, SEO optimized, reliable, and mobile-friendlyStudioPress themes as well as the StudioPress sites hosting business. Gardner said, “I think as a founder and someone who likes to own and appreciate what I’ve built, one of my biggest realizations throughout this process has been that sometimes you need to let go for things to grow.”

By the statement, it is sound and clear that he hopes to see StudioPress doing better in future with WPEngine. “This has really been a matter of identifying that it was time for StudioPress to take the next step—not so much for my own sake—but for the customers’ and the community’s sake,” he said. ”I know there is so much more reach and impact we could have, and now is the time to act.”

Next Gardner shed his light on the new Gutenberg editor, which is going to become the default editor with the release of WordPress 5.0. Many developers and designers are interested to work with this new editor but even any doubt about using it like how it works.

Some positive and negatives are going on, Gardner said he sees an opportunity to simplify content publishing with Gutenberg. “With Gutenberg, we’re moving into a new season of WordPress and publishing,” he said. “I know it’s taken some time and there have been some critics, but I see the gold in Gutenberg—it’s an opportunity to simplify content publishing by focusing on some of the easier methods of doing things rather than creating complex solutions behind the scenes.”

Gardner then explained the added functionality within Gutenberg that gives you easy to use themes and provides a great looking digital experience. In order to seize the opportunity that Gutenberg presents, however, Gardner wanted StudioPress to join forces with a partner that could provide additional capabilities and support to maximize the efforts that he wants to undertake.

Then, Jason Cohen, WPEngines founder stated that supporting Gutenberg was an example of the new precedent for supporting the WordPress core through the development of the Genesis Framework and the new themes made the adoption of new technologies like Gutenberg.

Cohen further added, “By expanding on StudioPress’ capabilities, and specifically, its theme framework that is used and beloved by so many, we have the opportunity to strengthen the wider WordPress community by making it so much easier to adopt modern technologies and to push WordPress so farther than it’s ever been before.”

Anyways WPEngine has always thrived to become an industry level hosting and now with this big acquisition, they are going to put a lot more improvements in StudioPress. It seems you can expect a lot more new child themes and features to the Genesis framework as well.

And they have promised to keep Genesis and other themes as GPL licensed forever. Hope you got an idea about WPEngine acquires StudioPress. If you have any queries please feel free to comment us. Your comments are most awaiting. You can subscribe to on Facebook and Twitter.

Prabhu Ganesan has provided his Web development and SEO services independently. He is Co-founder of Webicle Media and WPBlogX. He is very much involved in WordPress as it becomes a second nature for him. Find him on twitter @gprabhucbe

This site uses Akismet to reduce spam. Learn how your comment data is processed.

We use cookies for various purposes including analytics and personalized marketing. By continuing to use the service, you agree to our use of cookies.