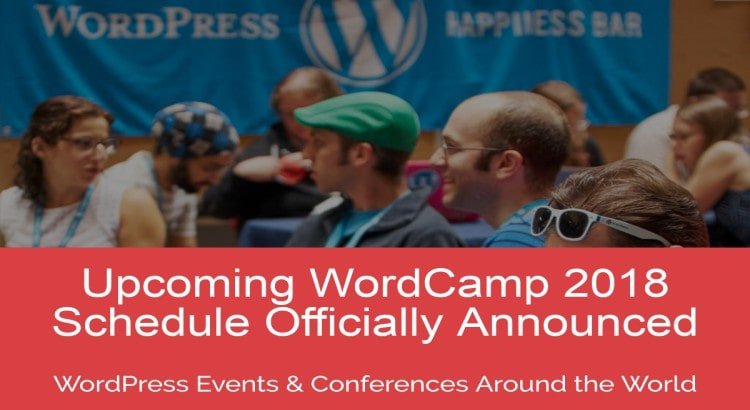 In this post, we will list you the upcoming WordCamp 2018. But before getting to know the list, we will show you what is WordCamp and to whom it is useful in order to make use of it. WordCamp is a community where they conduct conferences which are fully involved in WordPress. It is held all over the world. The first WordCamp was held at San Francisco in the year 2006. After that, it is been followed by many other countries.

As the name itself suggests that WordCamp is focused on WordPress. These WordCamp are conducted by a group of people, they plan the event and execute it. WordCamp doesn’t require any limitations. Anyone interested in WordPress can attend the conference and make use of it.

To Whom WordCamp is Beneficial?

It is not limited to anyone. The WordCamp event is cost-effective, and anyone can afford it. Besides from learning about WordPress, they take it as a place to meet everyone, to have a connected network. Each blogger meet to share their experience and much more. Each WordCamp is different based on the requirements and community.

People who are expert in WordPress, they volunteer come to the WordCamp and share their views, guidelines on WordPress, and sort out the issues faced in WordPress. It is an excellent place to learn, have fun and gain more friends. It gains your business knowledge.

It gives you wide range of topics such as choosing the right plugins, choosing the right theme, troubleshooting WordPress, setting up a new WordPress, design advice, blog advice, plugin development, social media advice, SEO advice and much more. Once if you attend the WordCamp, it pushes you to attend the upcoming events. You will have a great experience attending the WordCamp. The following are the upcoming WordCamp 2018 scheduled.

These are the upcoming WordCamp 2018 scheduled and announced officially. WordPress users stay focused, grab the ticket. Make use of it and bloom yourself in WordPress world.

We hope you like this article, If you have any doubts regarding WordCamp locations please comment here we will help you.

This site uses Akismet to reduce spam. Learn how your comment data is processed.

We use cookies for various purposes including analytics and personalized marketing. By continuing to use the service, you agree to our use of cookies.